This August while taking a river cruise through Europe I created a multilingual phrase book. It worked great, but the way the multilingual toolkit worked with Visual Studio was a pain. Once you added words and phrases to the default language AppResource file, you had to launch the multilingual toolkit translation app to do the translation. Though it could be selected within Visual Studio, it ran as a standalone app and after performing the functions, the app had to be closed. This had to be repeated for each language you used. Any guesses hoe much fun doing 45 languages was?

In Visual Studio, you have been able to select multiple files for a while, so… what if you right clicked on a bunch of xlf files? A new dialog opens with a progres bar for each XLF separated and a green check mark when done. 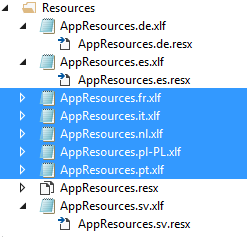 If you include a resx file in your selection you will not get the translation option. You can use the ctrl key to select the non contiguous XLF files like the sv.xlf file in this example.

As to the 45 language translations, I finally figured out that it was just a list of strings and I did not need to handle the information as a language file. That opened up the possibility of quite a few languages. All that was required was that the character set was supported on the Windows phone and I had a way of getting the strings translated. So, now it is a huge Excel spreadsheet with macros to go off and populate any new entries. When it is time to publish a new version, it is just a matter of copying a XML file to Visual Studio.

It turns out that version 2.2 was released in Feb 2014.  There is more information here:

One thought on “Visual Studio and the Multilingual Toolkit”