Back in February I attended an all day Virtualization Boot Camp. I fell in love with the cocept of virtualization back in my early mainframe days. No longer did I have to go into work to do testing at 2am on Sunday that would only last a few hours (if I actually got time), I could do it on my schedule, not somebody elses. 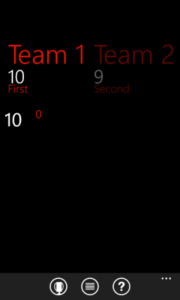 The structure of the boot camp was interesting. The day was divided into several sessions and each session was followed by a challenge. The challenge was basically to repeat what was learned in the session. To keep things interesting, the participants were divided into teams and teams were awarded based on finishing positions. The slow part of the process was that Excel was used to track the results. Nothing against Excel, but it would be far easier of there was an app for that. Now I can announce that there IS an app for that.

It basically requests the number of teams and provides a table of the results. There is an app button to enter new challenges, one for the LeaderBoard to see who is ahead and menu buttons to start a new event, Options to change the point weight for each positon or to clear the last challenge. On the challenge page is a tile for each team and it is just a matter of pressing the team number when it finishes. The colour of the tile changes to red and the position is displayed underneath. There is a button on the page to remove the last entered position.

The next version will be released soon and will be in English, French, German and Polish and will contain ads to captialize on the app. 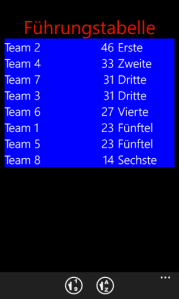 One thought on “WP7 Presentation App”